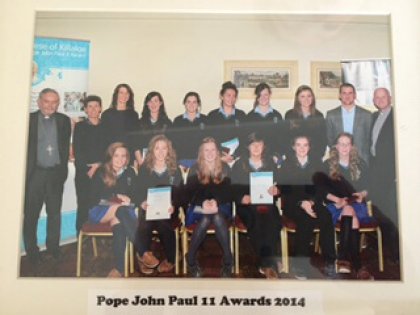 The John Paul II Awards is dedicated to the memory of the late Pope John Paul II who was so committed to young people and who had such belief and confidence in them. The award began in Derry in 2007 and has spread to fourteen dioceses since then.
The purpose of the award is to recognise and affirm the good work that young people are doing in their parish and in their community. It is based on the understanding that religion and faith is for living. The participant experiences a sense of personal achievement and fulfilment that comes from serving others, especially those in need.
The award is non- competitive, flexible and voluntary
The award is earned through Parish Involvement and Social Awareness and the preparation of a 1500 word presentation.T

The John Paul II Awards is offered to transition year students in Colaiste Muire.
Since 2014 students have successfully engaged with the awards process and have received their awards.