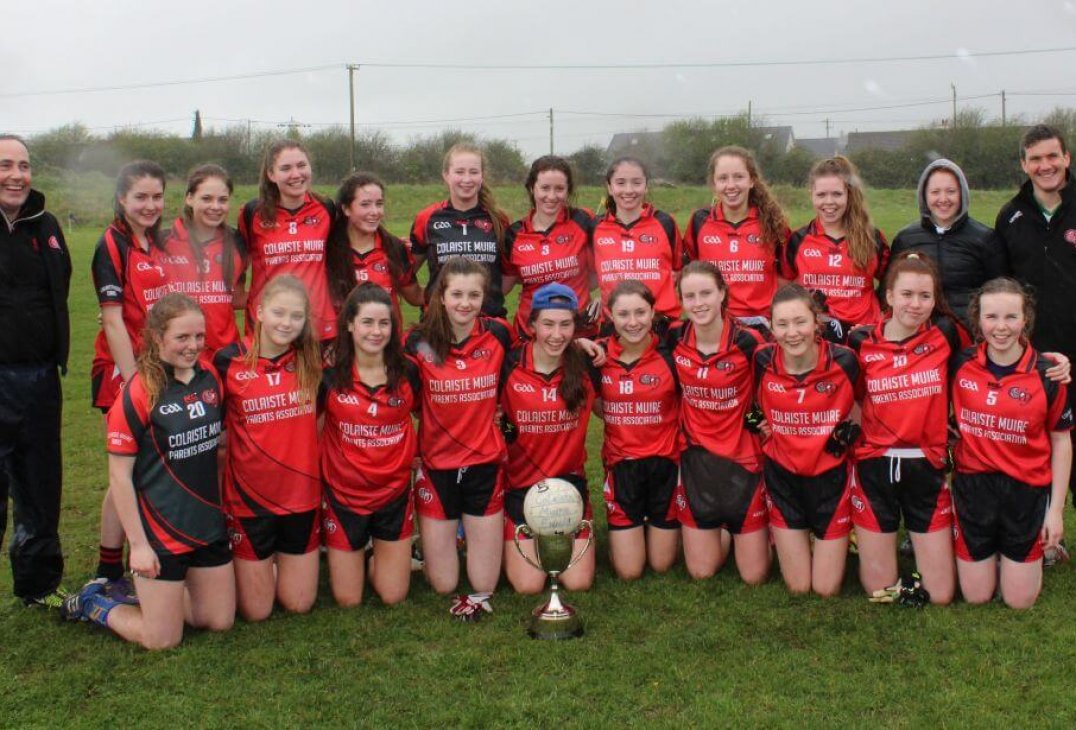 The school’s Junior A team had a titanic battle with St Mary’s High School, Midelton for the Munster Junior D Cup. Both teams had impressive victories in their semi-finals but with a number of Cork county players in their ranks the Midelton girls began the game as favourites. They started strong and had 1-2 on the board in the first 8 minutes. However Colaiste Muire full forward Emma O’Donoghue scored 2-1 in the next 5 minutes to push the Ennis school in front. St Mary’s replied with a period of sustained pressure which yielded 2 points after some excellent defending from the Colaiste Muire full back line. Colaiste Muire midfielder Aisling Reidy then kicked two long range points using the wind to maintain the advantage. St Mary’s dominated the final 5 minutes of the first half but could not make it count on the scoreboard with Aisling Kennelly making two excellent saves for the Ennis school. Half time score Colaiste Muire 2-3 St Mary’s High School 1-4.

Playing with the wind for the second half St Mary’s rattled off 1-2 in the first 8 minutes to take the lead again and looked to be in command. Indeed Colaiste Muire goalkeeper prevented a certain goal by tipping one dipping shot over the bar. However with the heavy rain now falling Colaiste Muire girls upped their intensity and in a scrappy 10minute period of play and scored 3 points to level the match. St Mary’s corner forward then kicked a point in the 20th minute but within a minute Aoibhinn O’Loughlin struck for a goal at the other end to push Colaiste Muire in front again. It was a lead they would not relinquish as Emma O’Donoghue stretched the lead with a point and then a well taken penalty, after being hauled down in the square. St Mary’s piled forward now scoring 2 points but Colaiste Muire responded with 1-1 from counter attacks. The referee blew the final whistle and Colaiste Muire celebrated a well-earned Munster Junior Title. Aisling Kennelly was awarded Player of the Final before captain Aisling Reidy accepted the Dan Cannon MLGFA Junior D Cup for 2017. Full-time score Colaiste Muire 5-7 St Mary’s High School Midelton 2-9.

In the opening match Colaiste Muire’s Junior B team were up against Scoil Mhuire Kanturk in the D2 Plate final. Kanturk, who got off to a dream start with a point from their centre forward and captain straight from the throw in. Colaiste Muire did not panic and while under pressure in the opening 5 minutes they managed to prevent any further scores.  Full forward Jessica Leatham got Colaiste Muire’s first score with a 14yd free, which was followed by an Anna Nagle goal and a point from midfielder Derrin Finnerty. Kanturk again had a period of good possession and a number of attacks but the excellent Ennis defence held them scoreless before half-time as the forwards added 2 more points to leave it 1-4 to 0-1 in favour of Colaiste Muire at half-time.

Playing with the wind in the second half Colaiste Muire kicked two early points before Annie Twomey scored a goal. Kanturk again replied with pressure which yielded two points but the Ennis girls were finding each other more freely now and added another goal and a point before the long whistle. There were excellent performances all over the field but for sheer workrate Derrin Finnerty was awarded Player of the Match before captain Ava Glynn accepted the Munster Plate for Colaiste Muire. Full time scorre: Colaiste Muire 3-7 Scoil Mhuire Kanturk 0-3.