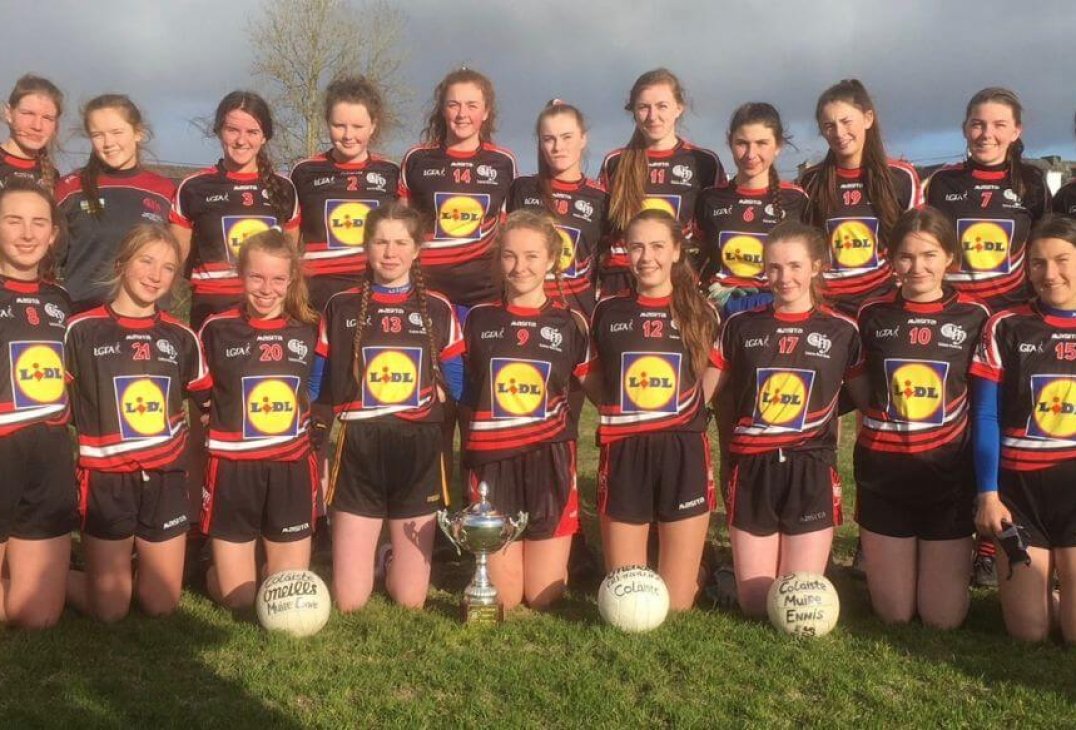 Coláiste Muire’s Junior A team showed great resilience in Corofin to come from behind very late and snatch victory from a very talented Spanish Point side at Corofin GAA, Tuesday 12th November.

After absorbing a few attacks the Coláiste girls started better and after a period of dominance came away with a brace of points from Aishling Costello and lead 0-2 to 0-0. Not long after this Spanish Point raided for the game’s first goal when the ball dropped just under the crossbar. The north Clare school were quick to tag on another goal within a few minutes to lead 2-0 to 0-2 heading for the end of the first quarter. The response from Coláiste was impressive with Ciara Sexton and Aishling Costello kicking 2 points each to draw level.

However Spanish Point moved the ball quickly up the field and created an overlap for Lauren Conway to find the net. Claudia Doohan kicked over a close-in free as Spanish Point pushed up on Coláiste’s kick out and after a period of pressure were awarded a penalty which was placed well into the corner of the net by Abbey Downes. Again Coláiste responded well and this time they raided for 2 goals as we headed for the half-time. However there was time for another goal by Spanish Point to leave the score at half-time 5-1 to 2-7 in favour of Spanish Point.

Coláiste began the second half with the aid of the strong breeze and used it well to hem in Spanish Point adding the first 4 points of the half to take the lead by the smallest margin. However Spanish Point would deliver yet another sucker punch with the next 1-1 from a period of sustained pressure leaving them 3 points up with 10 minutes left. The game became more open now and both sides attacked but the only scores came from Coláiste with 2 points to leave Spanish Point 1 point up coming up to the final minute. Spanish Point were now defending with everything they had and when the ball reached Coláiste full forward Ellen Casey she found space to shoot to the net and deliver the final score and take a 2 point lead with only 1 min remaining. Try as they might Spanish Point couldn’t get the ball back up the field and players from both sides fell to the ground exhausted at the final whistle. Best for Spanish Point we’re goalkeeper Nadine Pender, defenders Rachel Tubridy and Ellen Flanagan, midfielders Joanna Doohan and Sarah Looney and forwards Lauren Conway, Abby Downes, Caitlin O’Connor and Lucy Shannahan. For Colaiste Roisin Dillon made numerous saves in goals, while Sinead O’Connor and Hannah Doyle defended well. Roisin Cahill in midfield was player of the match and up front Aisling Costello and Ciara Sexton kept pointing the scores for Coláiste.