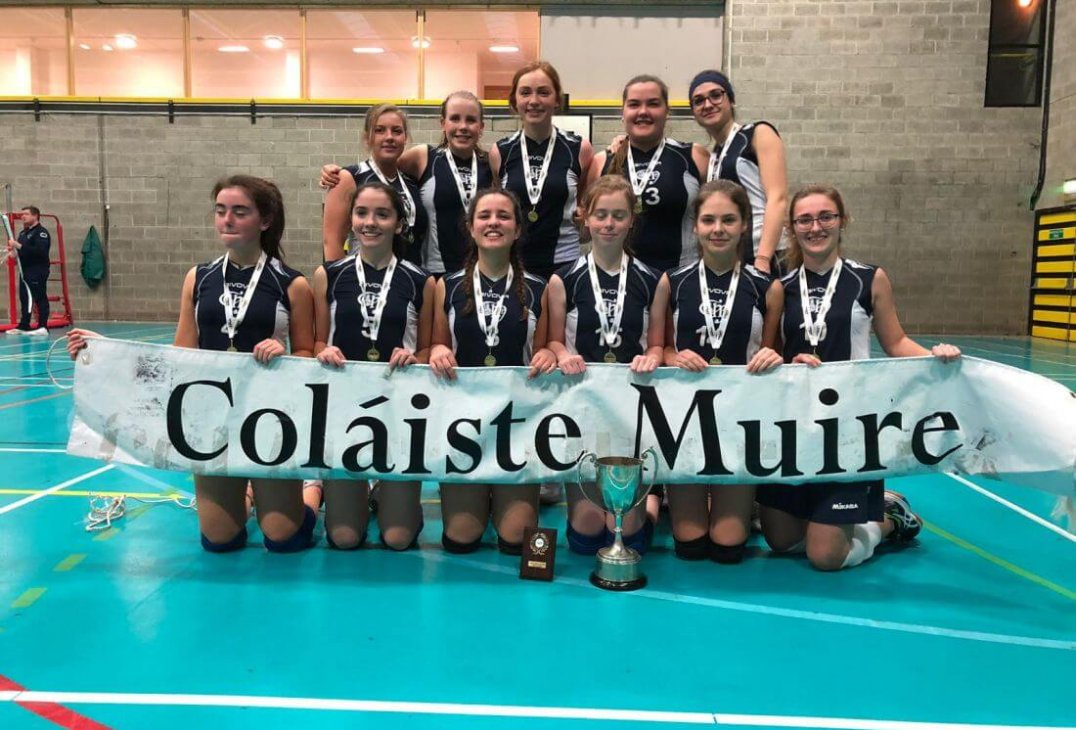 Colaiste Muire, have made a historic breakthrough this month, when they captured a first ever All-Ireland A Volleyball title over St. Raphael’s College, Loughrea in UCD.
Colaiste, who were unbeaten throughout the competition, clinically completed a famous win in three sets 25-21, 25-15 and 25-14, only a year on from exiting the competition at the semi-final stage to the same opponents.

The first set was a closely contested affair with Colaiste, contesting only their second ever final, working very hard to score points against the experienced Raphael’s girls who were relaxed and determined in the opening minutes of the game. Strong serving from team captain Caitriona Ní Riordáin and center Gemma Brady gave the Coláiste girls a slight edge,
while faultless setting from MVP Eimear Ní Choileáin provided the wing hitter Caitriona Ní Riordáin and centres Gemma Brady and Gaila Zanforlin with ample opportunities to test the opponnents blocks and cover.

In the second set, some really powerful serving from Laura Rosinanch and Gemma Brady ensured a 25-15 finish for the Ennis girls. With no m ore room for error, St. Raphael’s made some positional changes heading into the decisiive third set but Coláiste were psychologically on top by this stage and backed by some fantastic serving from Ní Riordáin and Brady ensured the cup was Ennis bound.

This win was well deserved for a special team, who have meteorically risen through the ranks, winning the Junior Shield, Junior Cup, Cadette A and, now, the Senior A title. The girls have two competitions left this year, the Senior Cup and the North-South competition. They have been fantastic role models for the younger volleyball players of our school, and we wish them the best of luck for the rest of the year.